My morning began early when I set my alarm to get up at 4am to watch the once in a life time complete lunar eclipse which is the longest of this century. I didn’t expect to see the Moon as there was cloud cover when I arose but thankfully disappeared. 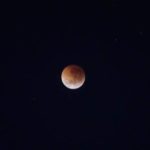 and was pretty amazing. A bonus was seeing Mars which is at its closest to the Moon now.

The next Blood Moon will not occurred until June 9, 2123 but it won’t be visible in Australia.